Most of us spend thousands of dollars on our education. But do we know how much the whole country and other nations spend on education? Well, here are some facts which may shock you.

When it comes to spending most on their students’ education, Hong Kong topped the ranking. Since in Hong Kong, an average person spends over $132,161 from primary school to university. HSBC publishes the data by surveying 8,481 families in 15 countries.

Following Hong Kong, next is the UAE, where an average person spends around $100,000. While Singapore secured the third position in the ranking as it spends nearly $70,939 on the expenditure of the students’ education. The data includes primary, secondary, and tertiary education.

The average money spends in France is the lowest of the 15 surveyed countries, which is $16,000. The same strategy goes for India, Indonesia, and Egypt. In these countries, parents spend less than $20,000 on their student’s education.

Education Spending in the U.S.

The organization for economic cooperation and development (OECD) reported the educational data from the nations across the globe. According to the most recent reports, the U.S. spends around $12,800 per student from elementary to secondary education. At the post-secondary level, the U.S. spends more than $30,000, which is 93% more than the average of OECD countries.

In this data, the U.S. also estimates the money provided through various sources like loans, scholarships, and so on. Furthermore, it includes private expenses, including fees and private loans, paid by parents and students. Apart from this, several countries spend more than the U.S. from elementary to secondary education. These countries are namely Norway, Austria, and Luxembourg, which spent around $14,353, $13,931, and $20,900. Among these countries, Luxembourg spends the most per student at the educational level.

Apart from this, OECD reported that 17 countries spend more than the average percentage of their GDP. Among these, Norway pays the most percentage of its GDP, which is 6.4% on education. Followed by Norway, New Zealand spends 6.3% of GDP, the U.K. spends 6.2% of GDP, and the U.S. spends 6.1% of GDP on education. 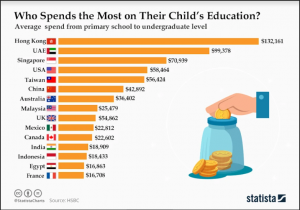 Planning Career of Students in the U.S.

The U.S. government is planning that tuition fees for a two-year post-graduation degree in engineering would be $26,400 in UAE and $19,700 in Australia. Coming to private expenditure on education, students’ parents are planning ahead of their careers.

7 Reasons That Online Learning is Better Than Attending School 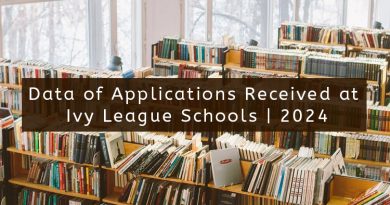