During the new academic session, students look out for universities as per their priorities to seek admission. While seeking admission, there are specific parameters on which they filter the universities. One such factor is the QR University ranking. As per the rankings, American Universities remain on top of every student’s mind. Every year, numerous international students are coming from around the globe.

Here are some reasons why American universities are best at providing quality education to students:

By keeping in mind all these criteria, the next step to finding out the top 10 universities in the USA to seek admission this academic year.

The University of Pennsylvania is an Ivy League university located in Philadelphia, US. Benjamin Franklin had found this university in 1740 intending to educate future generations. The university majors in providing an enriching experience to students in all academic programs. It also conducts online learning program, with a mission to provide global access to its educational resources.

Columbia University is an Ivy League university located in Upper Manhattan, New York City. The college has a royal history attached to it. The Royal charter of George the Second of Great Britain named it King’s college until later in 1784 when it got its new name Columbia University. The university has many famous alumina figures such as Samuel Johnson and three US presidents.

The college has many famous graduate schools, including:

Yale University is an Ivy League located in New Haven, Connecticut. The English puritans founded the university in 1701. The university is the third-oldest institution built in the USA. It has various schools including 14 undergraduate schools, Yale Graduate School of Arts and Sciences, and 12 schools for professional courses. The university has five US presidents as alumina- William Howard Taft, Gerald Ford, H.W Bush, Bill Clinton, and George W. Bush.

Cornell University is a renowned institute located in Ithaca, New York. It was founded in 1865 as the first university that offered a degree in the field of journalism and modern Eastern languages. The university has a flourishing architecture with enormous laboratories, buildings, and auditoriums. There are a plethora of student organizations such as athletic and for other cultural activities.

Princeton University, located in New Jersey, was established in 1746. It is one of the greenest universities around the world. The university has two US president James Steward and Woodrow Wilson as Alumina, including other renowned personalities such as Peter Conrad and Michelle Obama. The university provides quality education in the field of Social Science, Engineering, and multiple professional studies.

The University of Chicago is a private university located in Chicago. Established in 1856, it has several branches such as:

The university has an active theatre coaching students in various forms of media and film art. The alumina of the university include twenty-nine Nobel laureates and the US president Barack Obama

California Institute of Technology is located in Pasadena, California. It is a renowned institute providing professional degrees in Science and Engineering.

Harvard University is the oldest institution in the United States. Established in 1636, located in Cambridge, Massachusetts, flourishes with the world’s most dynamic academic library with over 18 million volumes and 400 million manuscripts. The university has eight US president, Billionaires, Scholars, etc.

Massachusetts Institute of Technology (MIT) was founded in 1861. Since then, it has been fulfilling its purpose of “mind and hand,” i.e., providing quality education in the field of Science and technology. MIT has five schools under the main body:

The university campus is highly praised world-wide because of its stunning architectural design ranging from neo-classic, modernist, and brutalist. The university is also known for its highly-paid job placements and extremely talented professors. 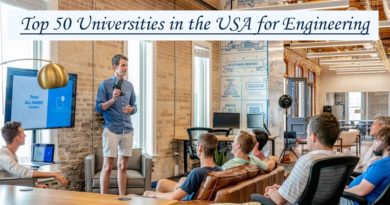 Top 50 Universities in the USA for Engineering