Some of the Ph.D. disciplines offer six-figure early-career salaries.

Number of Higher Education Institutions in the United States | 2019-2020 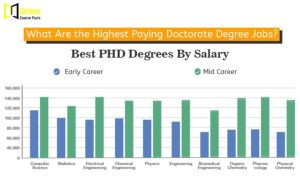 Moreover, Ph.D.’s in organic chemistry requires to do program approved by the American Chemical Society.

Ph.D. in computer science is pursued by students who have an interest in becoming computer research scientists. Moreover, jobs for computer scientists will increase by 15% in the year 2024, according to the BLS reports.

A Ph.D. in Pharmacology offers a career in various health organizations as a researcher or pharmacist. Additionally, doctoral degree holders in Pharmacology take training in the study of drugs and chemicals. Job outlook as pharmacists is expected to be 3% growth rate.

Physical chemistry is all about matter and how molecules behave. Also, it is the study of how chemicals react.

The growth rate will be 3% for engineering doctoral degree holders in the next seven years.

To research physics, one must be a doctoral degree holder in it. Within seven years, this data will increase by 7% resulting in more Ph.D. holders in physics.

Biomedical engineering is a field which is constantly evolving and requires experts versed in life sciences, theory etc.

Doctoral degree holders in this field open up a wide variety of opportunities for themselves. Biomedical engineers work in hospitals, manufacturing and research facilities.

Statistics is a unique subject, so doctoral degree holders in statistics have broad scope ahead. Statistics solve problems in industries, businesses etc., by collecting appropriate data. According to BLS, the job outlook will increase by 33% in the coming seven years.

Opportunities for Ph.D. Degree Holders in the USA

The popularity of the USA as an abroad destination for studying is increasing day by day. For this reason, over 1 million students are studying in the universities of the USA. It’s a Ph.D. level that the United States made a mark of excellence. Also, the United States’ standard of training and research development makes it different from the other countries.

Here are some of the reasons why the USA should be your study destination for the Ph.D. level.

As instead of jumping on to a dissertation, you’ll have time to develop your understanding of the subject. Moreover, in the end, you’ll be clear on what topic you want to research.

The United States boasts the hub of leading universities for doctoral degree holders. Moreover, it reflects the country’s priorities and investments in these educational institutions. No doubt, the USA is the best study destination for students all across the globe.

The universities in the US host a massive number of students from countries across the globe. So wherever you study, you will always be welcomed in the US educational community.

It is fascinating that the USA is continuously innovating its educational system and best known for doctoral education. The USA was the second country to adopt a modern Ph.D. degree after Germany. And still today, it has set itself as the example of and a hub for doctoral degree holders.

The United States has to offer various opportunities and the only ones who know how to tap it. Doctoral degree holders studying in the USA can expand their horizons to secure excellence in their field.

10 Most Expensive Universities in the USA

The United States of America always has the best universities and colleges all over the world. Millions of students migrate to get education use their degrees to work in the finest companies. The best thing doesn’t come at a low cost.

The University of Chicago was founded in 1890 in Chicago, Illinois. Around eighty-one thousand five hundred thirty-one dollars is the annual fee of this university, with an acceptance rate of only 6%.

Moreover, Chicago university is well known for its locality and diligent education. In the world ranking of best universities, this one came at 10th spot. The University of Chicago is the most expensive in the USA.

They accept few students only, who are capable of pace up with their curriculum. Therefore accepting few students means students are willing to pay an extravagant cost. It is one of the most demanding colleges to get into.

Columbia University is in New York City, but it’s more popular than the city. The most popular courses that students apply for are social sciences, performing arts, engineering.

It was established on 25th May 1754. In addition, the annual fee of Columbia University is 79,752 dollars, which makes it the most expensive university in Ivy league universities. Taking only 5% students per year out of 40,000 applied.

Founded in 1851 in Evanston, Illinois, Northwestern university charges 78,654 dollars annually. Northwestern is best known for exploring maths, sciences and praise for its theatre and music program. In addition, the student acceptance rate is 9% in this university.

Barnard College is a liberal arts college for women in New York City, New york. Moreover, students have to pay 78,044dollars per year. Barnard college street cross neighbor, is Columbia University. The number of students in Barnard is 2500(approx.). Only 12% of students get selected annually out of more than 9000 applied.

This college is also liberal arts for women based in Claremont, California, established in 1926, known for its multidisciplinary core syllabus. Women have to pay a 77,588 dollars fee for this college in California. The acceptance rate of Scripps college is 32%.

Brown university is also an Ivy League university, in Providence Rhode Island. Also, yearly, students have to pay 77,490 dollars. Set up in 1764 in the time of the English monarchy. Brown university is the 7th oldest educational institution in the United States.

They are known for their world-class teachers and their unique way of teaching. Brown university’s acceptance rate is 7.1%.

University of Southern California’s fee for one year is 77,459 dollars. Robert M. Widney started it in 1880. USC is in the middle of California in Los Angeles and one of the oldest universities. Moreover, it is regarded as one of the best schools for cinematic arts and business.

Apart from this, USC has its football teams named Trojan football and greek life, representing USC at the national level. The acceptance rate is 11.4%.

Benjamin Franklin founded this university for its multidisciplinary curriculum in 1740. Pennsylvania charges its student 77,264 dollars per year. University provides an excess of engineering plans for students to choose from, like; earth science, aerospace, etc.

Therefore, Growth in the field of engineering is not like any other university in the United States. UPES is also an Ivy League university. They welcome only 8% of top students to give them the finest education out of thousands who applied.

Undoubtedly this is an Ivy league private college in Hanover, New hemisphere. One of the oldest institutions in the United States started before the American revolution. In Dartmouth, an Ivy League college, the student has to pay 77,152 dollars per annum.

Earlier it was a public university, but in 1819, the state legislature turned it into a college. The acceptance rate of Dartmouth college is 8%. 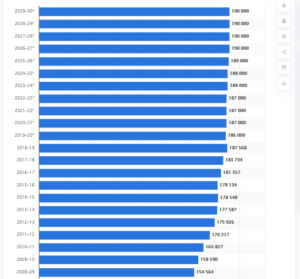 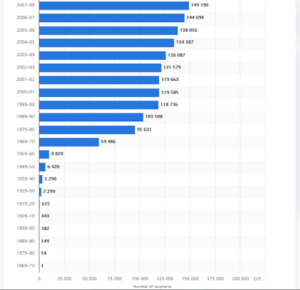